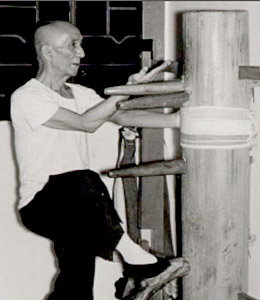 Yip Man
It is generally believed that the Wing Chun Kung Fu system was developed by a Buddhist nun named Ng Mui, trained in Shaolin Kung Fu, over 300 years ago in China. She synthesized all of the martial arts she had learned at the Shaolin Temple down to a simple and direct fighting style that anyone, regardless of size, could use. Her first pupil was a young woman named Yim Wing Chun. The nun named her style of Kung Fu after this student.

Wing Chun, along with other styles of Chinese Kung Fu were closely guarded secrets, usually passed on only to family members or close friends - and even then, only after years of proving themselves worthy. Until almost forty years ago, no foreigner had ever seen the Wing Chun fighting system.

In modern times, Grand Master Yip Man (pictured above) was the foremost authority on this very effective martial art. He began his Wing Chun training at a very early age. As his "sticky hands" (chi sao) developed, he became famous for his sensitivity and the uncanny ability to predict what his opponent was going to do next. Yip Man is most famous for being Bruce Lee's martial arts instructor.

Wing Chun specializes in close quarters fighting. Wing Chun practitioners are trained to fight against an opponent who is directly in front of you. This style is famous for "trapping" an opponent's limbs and redirecting their momentum to neutralize the attack. Wing Chun fighters simultaneously trap and strike the opponent, a technique unique only to Wing Chun. 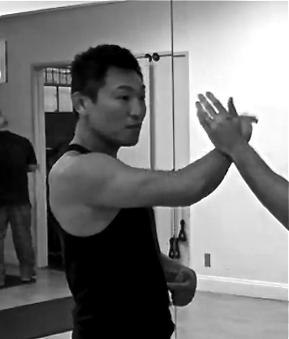 "I met Jin during a Brazilian Jiu Jitsu class and talked to him about Wing Chun as I'd seen some of his videos online and was impressed with his conceptual explanations of the art. I had studied Wing Chun before under a different lineage and left because I didn't see how it would work against a competent boxer or kick boxer. Having spent many years training in boxing and Muay Thai, I knew that from range, Wing Chun was not effective. Jin's ideas about Wing Chun were completely different to anything I had come across before, so I went down to his gym to check it out.

Very quickly, I realized Jin was the real deal as he neutralized everything I threw at him (and I really did go for him) and threw me around the room like a rag doll. From range he wouldn't strike with me, instead parrying my punches and waiting for an opportunity to close. Once he did, he would make contact with my hands, go in then proceed to drive me back with his Wing Chun structure. Having a Jiu Jitsu background as well, I tried to take him down, but his structure was so good I couldn't come close. And this all happened without him hurting me in the slightest. I'd never felt anything like it and decided then and there that I would become his student.

Jin is too humble to brag, but I've trained with a lot of very good fighter - pro boxers and kick boxers and world class Jiu Jitsu competitors - and I can honestly say, he's up there with the very best. Jin has drastically refined the art of Wing Chun into one that adapts to other arts and counters their weaknesses with its structure. Jin's Wing Chun is defined by simplicity, economy of movement and reflexive reaction.

Jin's contribution to Wing Chun won't be fully understood for a few years to come, and the least I can do is spread as best I can his teachings and add my own unique take on them. I sincerely believe our concept of Chinese Boxing will revolutionize the way self defense and Mixed Martial Arts are taught."